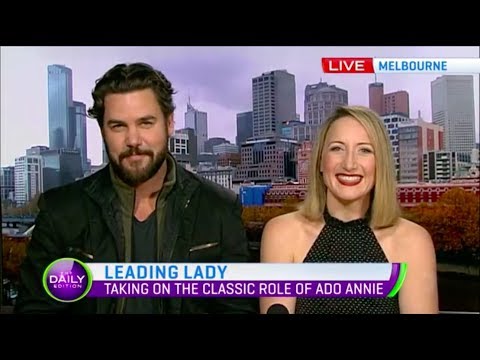 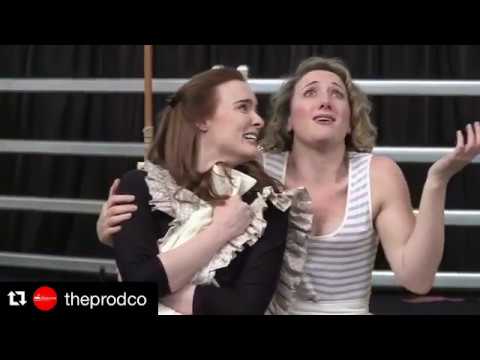 Interviews with the cast of OKLAHOMA 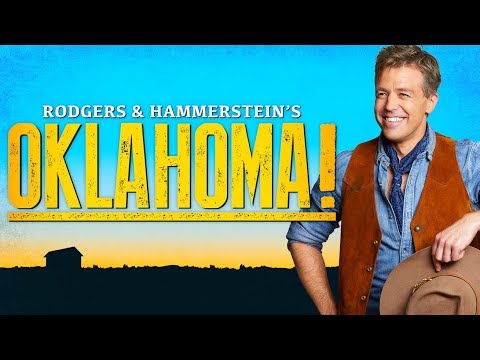 Set in the Oklahoma territory in the early 1900s, this musical tells the story of two pairs of lovers. Curly is a cowboy who has trouble admitting his feelings to Laurey, as she does to him, because of their stubbornness. Judd, the hired hand at Laurey’s farm, tries to come between them. Ado Annie is torn between Will, a cowboy who has strong feelings for her, and Ali Hakim, a peddler who’s a ladies’ man.   Elise plays Ado Annie – the naive, youthful, unrepentant maverick feminist! Meanwhile, in the Oklahoma Territory of 1906 where they all live, farmers and ranchers lock horns in a battle over water rights and fences.

OKLAHOMA! features countless musical theatre hits including Oh, What a Beautiful Mornin’, The Surrey With The Fringe On Top, People Will Say We’re in Love, I Cain’t Say No and the title song Oklahoma!.

“The Production Company begins their landmark twentieth season with a concert staging of Rodgers and Hammerstein’s Oklahoma!that is simply as good as it gets.

“..a knockout staging of Oklahoma!in which each element is at the highest standard.”

“Given the striking similarity between the frisky roles of Ado Annie in Oklahoma! and Meg in Brigadoon, it is a credit to the range of Elise McCann that she gives such distinctive performances in subsequent seasons.”

“…this marvellous production of Oklahoma! stars the cream of our musical theatre talent – it is cast as well or better than a commercial version would be – and they bring this Rodgers and Hammerstein classic to life with infectious energy.”

“… the comic subplot (Elise McCann as Ado Annie, Bobby Fox as Will, Grant Piro as the Persian peddler) is handled with lustre”

“If you love Rodgers and Hammerstein, get on your wagon and make a beeline for Oklahoma! Chris Parker directs an all-star cast with dynamism, skill and attention to character, creating a fitting tribute to mark the 20th anniversary of a company vital to Melbourne’s musical theatre scene.”

“an utterly rousing and robust interpretation of the material that never feels heavy-handed or laborious.”

“… an immensely top- notch cast; there are so many fIne performers here it’s almost an embarrassment of riches. “

“Bobby Fox and Elise McCann were the comic lovers, Will and Ado Annie, who sang and danced up a storm”

“The standing ovation at the end said it all. “