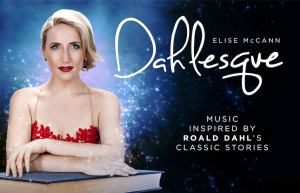 Elise’s Debut Album DAHLESQUE was released nationally under ABC Music/Universal on Friday 23rd June 2017.  The physical album features two original new compositions by Stephen Amos of Roald Dahl’s Revolting Rhymes, created expressly for this album and featured exclusively on the physical album only. The physical album can be purchased through the ABC Online Store, or at Sanity or JB-Hi-Fi.  Dahlesque is also available digitally through iTunes or Spotify. Read more and learn about the album on our Album page

Elise presented the World Premiere DAHLESQUE Concert at the 2017 Adelaide Cabaret Festival from June 17-18 and most recently performed the show with the World renowned Melbourne Symphony Orchestra over 6 shows in April 2018.

Elise most recently performed DAHLESQUE with the Auckland Philarmonia Orchestra on 11 May 2019 at the Auckland Town Hall.